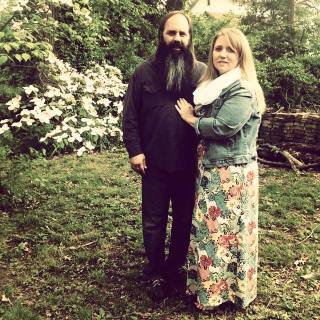 Hey Augustine began as husband and wife Chad and Jennifer Detering of Nashville, Illinois. For love of music and a passion for the gospel they began writing songs and making home recordings under the name Flat Earth Band. The two began performing their own songs in 2012 when, with a modest home recording in hand, they played the Agape Music Festival in Greenville, IL. Since that day, they continued to perform their gospel saturated blend of folk rock music in Churches, homes, public parks, Camps, and other music venues as they raised their ever growing family. In 2016, five of their children joined them on stage for a missions fundraising event and the family band was born.

Chad is a self-taught guitar player and the band’s primary songwriter. He has a wide range of musical influences, and is drawn to honest lyrics, storytelling, eclectic rhythms, and folk/rock/blues instrumentation. Jennifer grew up singing songs in church from the young age of six, and became a student of the piano at age ten. Her musical gifts have been put to use over years of service in the local church for much of her life. They lead worship together for more than 15 years as part of two different church plants.

Daughter Emily is a singer, multi-instrumentalist, and aspiring songwriter. She serves as the bands “utility infielder” moving gracefully between acoustic guitar, violin, glockenspiel, and electric guitar…as needed. Aiden, Connor, and Caleb provide a more than capable back line on drums, bass, and other instruments.

Hey Augustine’s music draws from a wide range of traditional and modern influences, and are not easily described by a single genre. Hey Augustine lyrics are rooted in the gospel of Jesus Christ.

Life is full and full of meaning. God is near. He speaks and moves…chastises and forgives…loves and pursues. We listen for Him and follow…often failing but always learning. Along the way we’ve found a desire to make music. How could we keep it to ourselves?

A Ministry Department of